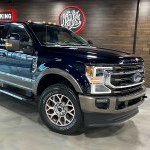 Sore Subject... What are the fuel prices in your area?